On the hunt for the structure: Prof. Arne Möller interviewed

If you know the structure of a protein, you understand its function! That is the doctrine of structural biologist Prof. Arne Möller. Starting in autumn 2020, he will finally be able to pursue his love for the structure of the smallest molecules in Osnabrück. You might then get to know him in his lectures. Find out here, what structural biology means to him personally and what type of student he was during his studies.

Grown up in Osnabrück and after having lived for more than 20 years in Mainz, San Diego, Aarhus and Frankfurt you are now moving back to Osnabrück for the new structural biology professorship at the Department of Biology. How did this come about?

I was born in Schweinfurt, but moved to Osnabrück when I was only 5 years old. The fact that I'm coming back here is, in addition to the professorship itself, a real icing on the cake! I hadn't even really planned or thought about returning to Osnabrück (although I like it here very much) and rather was searching all over Germany. When I applied for the job here at the university, I quickly realized that I fit perfectly here, which was actually the main reason to come back to Osnabrück.

With the move from the Max Planck Institute for Biophysics in Frankfurt to Osnabrück University, teaching will also become a current subject for you. Are you looking forward to it?

Yes totally, I really like doing that! I'll soon be offering the practical course for Chemistry, but right now, planning is a bit difficult because of Corona. Together with the chemistry didactician Prof. Marco Beeken, we are therefore preparing a digital laboratory, a project that is also supported by the university. Of course, this is not an adequate replacement, but it is as good as it gets during this time - and later on, students can use this digital lab to prepare for exams etc. In autumn I will offer the module Structural Biology, which I am looking forward to.

We have all turned our hobby into our profession and of course it is nice to be able to show young people why we are interested in it and why it is fascinating.

In structural biology, we determine the structure of the small proteins and macromolecular complexes that do their work within our cells. Since in nature, structure always determines function, a bunch of information is obtained as soon as the structure of these nanomachines has been clarified in detail. In my group we mainly use electron microscopy for this purpose. What I like most about electron microscopy is that it is a direct method. If you have been standing in the laboratory all day and pipetted clear liquids into other clear liquids and then bring a drop of this sample to the microscope and suddenly see small objects at a magnification of a hundred thousand times, which then really look like a protein you see pictured in a school textbook - that is something I never forgot and I still find it fascinating. When I saw this for the first time as a graduate student, I immediately said to myself: You have to do this!

In the meantime, the technology has become so much better: In the past you were happy about a white dot and today you can even detect single atoms! Proteins are made up like small machines in which repetitive components are always assembled differently, just like Legos. The possible function of the protein is then a result of this combination of components.

Here in Osnabrück, we are currently establishing the cryo-EM in the CellNanOs research building. (Editor's note: Cryo-EM, short for cryoelectron microscopy, is a method in which the sample is examined in a shock-frozen state. Thus, an unadulterated image of the sample can be generated, because fixation and contrast agents are not required. This special microscopy technique was awarded the Nobel Prize in 2017). We are very excited about what we will discover and look forward to working with the various research groups here on campus. 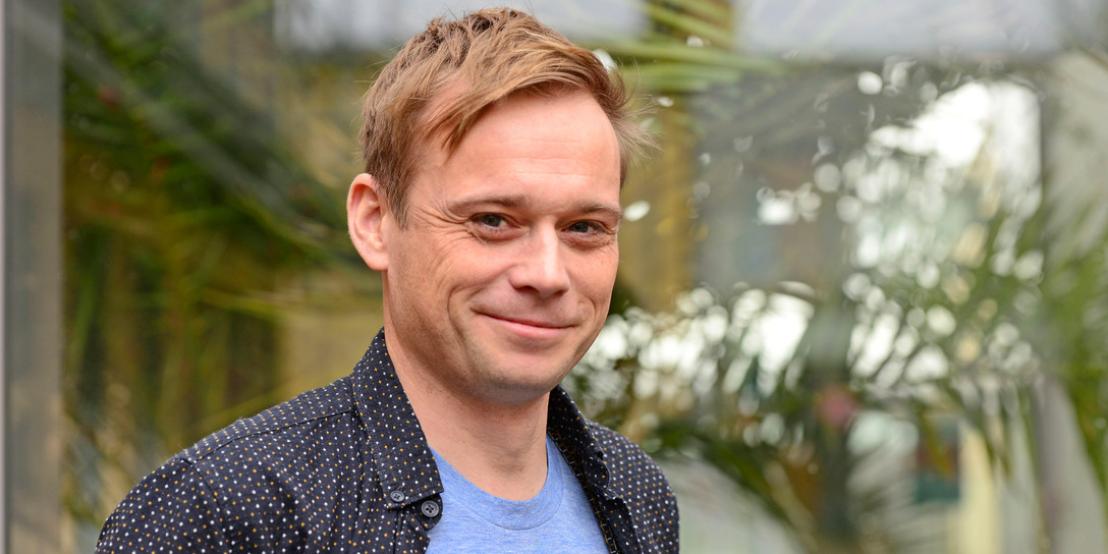 Nature always determines the function by its structure. This applies to our hand with its four fingers and one thumb, as well as to a protein. Knowing the structure means that you can explain the function much better. Structural biology thus answers many open questions.

After your doctorate you spent a long time in San Diego in the USA to do research and are now back in Germany. Have you noticed a difference in the scientific mentality between the two countries?

Yes, I have experienced huge differences! That's why I think it's so important for any scientist to go abroad and expericence it. The overall approach to scientific problems is different when you compare the USA with Germany. After having experienced both, you can pick out what works best for you. In the USA, I learned not to give up too early and always to try everything!

As a student, I think, I was quite good, but as a pupil I was rather not! After having finished the school, I first studied mechanical engineering, I don't know why I didn't directly dare to study biology. But then I went to Mainz to study biology and from the beginning, I was part of a great learning group. There were three of us and until today, we are friends, one of them is even my best man and the other one is my best friend. I think that gave me a lot. Once you have made it to the start and really dive into your studies and have gotten used to the work processes, it becomes easier. Then you are sure about what is important! Because my problem at school was that I never knew what was important. My study group helped me a lot there, it gave me a different perspective.

Do you also recommend students to join such groups during their studies?

Definitely! It is not that you need to depend on such a group, because in the end, you'll have to pull through alone. Because after all, studying also helps you to learn how to learn. As a pupil I was certainly not stupid either, but too often I chose the wrong approach. I only got this right thanks to my study group.

Was there a special experience or event during your scientific career that motivated you to pursue a professorship?

I have always been a hockey coach and a rowing coach, which means I have always liked teaching people. In addition, science and discovering things have always fascinated me. But I never clearly dared to say "I'm going to be a professor!" and I always had an exit scenario from science at hand. But when I was able to publish such a particularly important publication in 2017, I thought, ok, now is your chance! So I threw my exit strategy overboard and did everything I could to make it work. Somehow I knew deep down that it would work out! 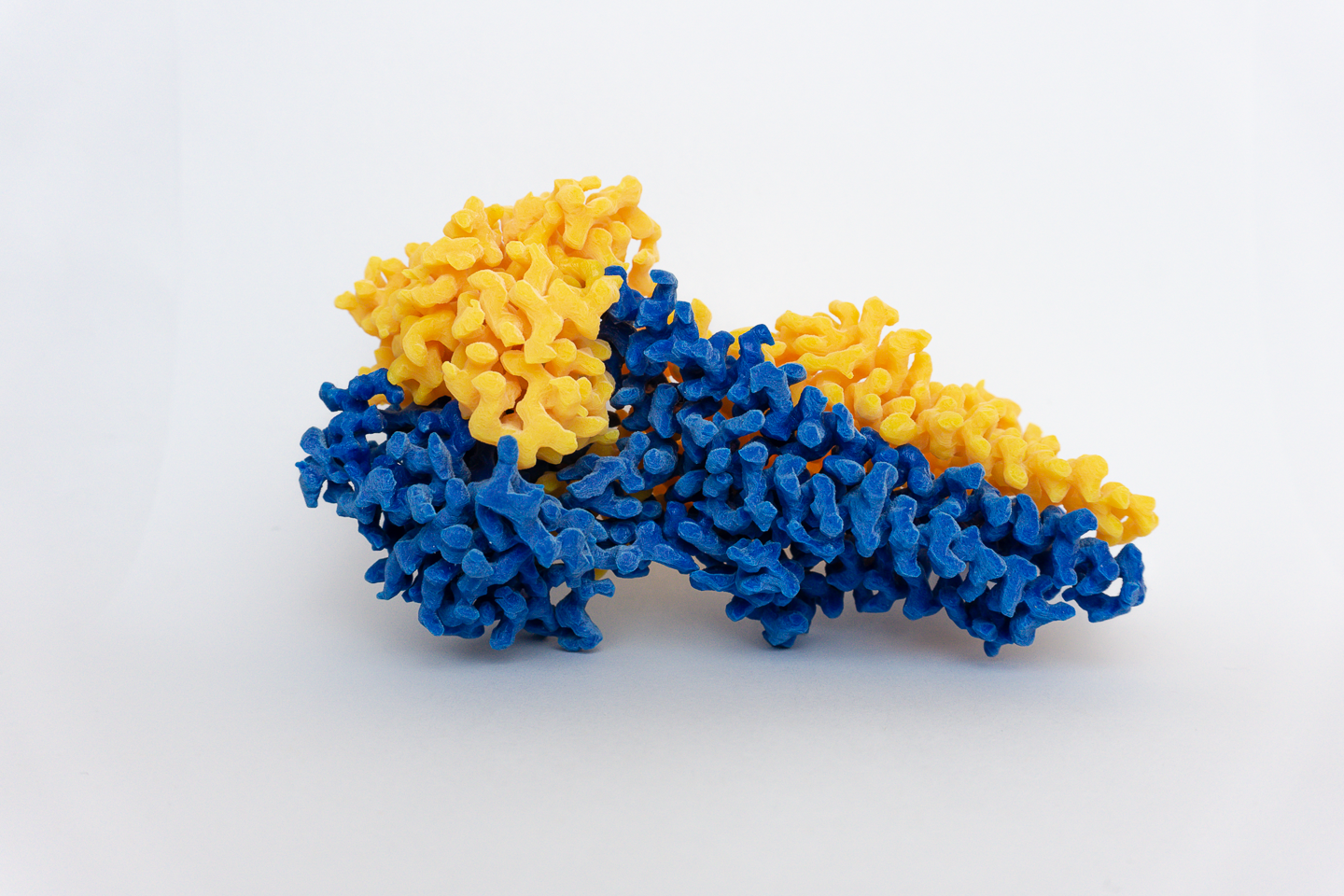 In order to better understand the structure of a protein in the truest sense of the word, Prof. Möller uses a 3D printer to recreate his research objects on the fly. This specific model of an ABC transporter with two subunits has a resolution of just 2.8 Ångstroms. One Ångstrom represents an incredible ten millionth of a millimeter and is the average size of a single atom! Accordingly, this model is so detailed that the side chains of the amino acids can be seen with the naked eye, as they protrude from the model.

What is challenging about science?

Emotionally, I always describe science as a sine wave (or cosine - depending on how you start). One day everything is great, you have good results and the experiments work. A few days later you are disillusioned because not much works, the good results of the day before cannot be experimentally confirmed or you find out that you did everything plain wrong. This ongoing up and down in science is a big challenge.

How do you stay motivated if you hit a low?

Because I know that it will be better again, because it is a sine wave after all. It really is!

Which book and which publication is currently sitting on your desk?

The last book I read was about a punk rock star who realized that he is actually a woman. The book is called "Tranny" and is written by Laura Jane Grace. The punk band is called "Against Me!" by the way. I thought that was very good. The research paper that is currently on top of the stack is a very detailed method paper, I actually like to read those the most. It is about how to improve glass slides for electron microscopy. It is by John Rubinstein and is called "Shake-it-off". But I read new scientific papers every day and every week, this is now the one of today. In our structural biology working group we have a Journal Club where everyone presents what he or she is reading at the moment and makes a recommendation to the others whether they should read it as well.

What are your hobbies?

My hobbies are my children and my family, most importantly! I like to ride my bike and play field hockey as well, I'll see if I can continue playing in Osnabrück, I've seen there are two groups.

Thanks a lot for the interview!